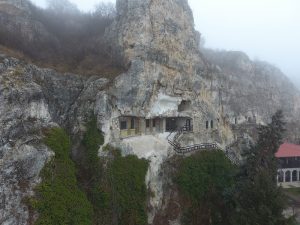 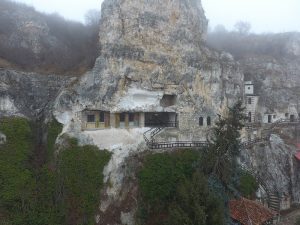 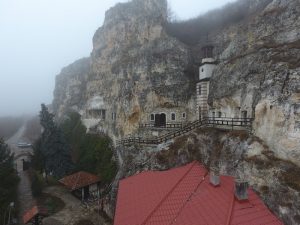 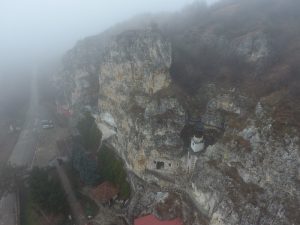 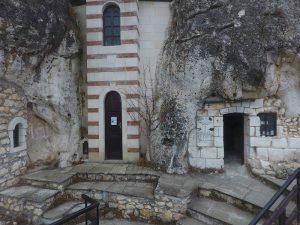 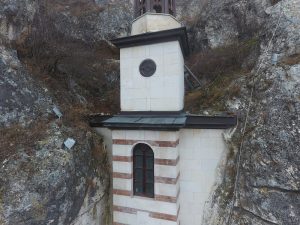 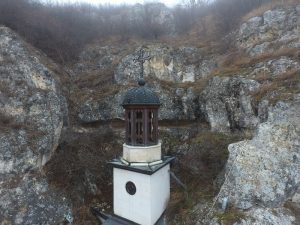 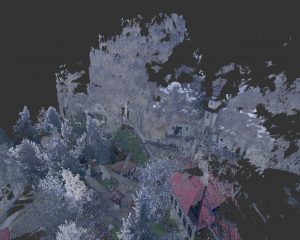 The monastery “St. Dimitar Basarbovski ”is located in the valley of the river Rusenski Lom, near the village of Basarbovo, Rousse. It is the only active rock monastery in Bulgaria. In 1978 it was declared an archeological monument of culture of local importance.

The monastery has existed since the Second Bulgarian Kingdom, but the first information about it is from the beginning of the 15th century. For some time in the XIX century remained without a monastery. In 1937 Father Christant from the Transfiguration Monastery settled there. It gives a fresh start to the religious center. A chapel dedicated to St. Dimitar Basarbovsky was built, but in 1940 it was destroyed by a flood. The following year, a carved iconostasis was made in the rock church. The complex of the monastery consists of two rooms in the rocks and a cave, which were built in 1956. The stairs lead to a rocky platform with a niche in which, according to legend, the saint slept. A large icon of the saint is placed there, in full height, and around it are life scenes with inscriptions in Romanian and Greek. Other stone steps lead to a natural cave where the monk who breathed his life into the monastery – Father Chrysanth, is buried.

The most famous inhabitant of the monastery is Dimitar Basarbovski, whose name is named after him. He lived in the seventeenth century (1625 – 1685 – they are controversial). He was born in the village of Basarbovo. There are different stories about his life. He raised sheep. He lived modestly. He had the glory of a quiet, respectful, God-pleasing man. He treated every living being with care. He decided to go to a monastery and thus ended up in the cave of the existing one. He remained there until the end of his earthly days.

The traditions surrounding his demise are many. According to one, he himself foresaw his death. When the time approached, he went to the bank of the nearby river – Ruse Lom, lay between two stones and died there. After a while the river came and carried the remains of the saint.

Another states that when he was old and unable to climb the stairs to his niche, he built a hut near the river. Next to it is a well whose water was considered curative. One day, a flood brought the hut along with the hermit. The legends related to the discovery and preservation of the saints’ relics continue.

After 33 years (so much Christ was crucified, called the “age of Christ”) a blind girl from his village dawned that if he washed his face with water from the well of the monastery, he would look. One night the girl went to the monastery. You poured water from the well and drank. Suddenly her eyes became ill and she washed them with the same water. It was a miracle, she looked. With those eyes already visible, she saw the relics of the saint in the river. The name of St. Demetrius Basarbovsky has spread.

Initially his relics were exhibited in his father’s house, later in the rock monastery, and today they are located in the Patriarchal Church of St. St. Constantine and Helena ”on the Dyulul Patriashiye Hill in Bucharest.

According to one legend, during the Russo-Turkish War (1768-1774) the relics of the saint were to be transferred to Russia. The road passed through Romania. There the population was dying of a terrible plague. When the saints’ relics passed through Bucharest, the epidemic disappeared and people were no longer dying. For this reason, his residents asked the Russian authorities for Dimitar Basarbovsky’s body to remain in Bucharest, where it is today.

Many miracles are associated with his relics – healings from various diseases on Bulgarian and Romanian lands. Among the population of Romania, he is regarded as its patron saint of heaven. For this reason, many Romanians visit the monastery, especially during Christian holidays.

On October 27, 2005, at the request of N. Sv. Bulgarian Patriarch Maximus, His Beatitude The Romanian Patriarch Theoctist makes a gift to the monastery – an icon with the image of St. Dimitri, in which a particle of his relics is embedded.