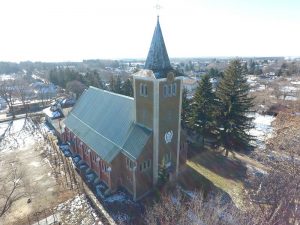 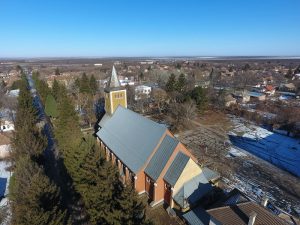 St. Joseph is a Christian church in the village of Bardarski Geran, Northern Bulgaria, part of the Diocese of Nicopoly of the Roman Catholic Church. The church is a parish church. The village is the largest of the five villages (the others are Asenovo, Bregare, Gostilya and Dragomirovo), populated by Banat Bulgarians – Catholics who returned from Banat (Romania) to Bulgaria after the Liberation (1878) and inhabited all or part of these villages. and at the beginning of the 21st century.

At the end of the seventeenth century, many of its inhabitants settled in Wallachia – Banat, where it was previously known to the princes of Wallachia, whether they granted him privileges as merchants. In this area are formed two large Bulgarian municipalities – Beshenov (where the first settlers of Berdarski Gerani came from) and Vinga. From the mixing with the emigration stream from Svishtov-Nikopol, today’s Banat Bulgarian population is formed.

With the foundation of the new village in 1887 a school and a church were founded. The first church was a chapel built in the parish (priestly house) by Father Laurentius Manganelli.

In 1903 the first stone of the new church was blessed by the parish priest of the nearby village of Gostilya. On March 25 (Annunciation) 1903, then Bishop of Nikopol, Monsignor Henry Dulce blessed a wooden cross, at the place where the main altar of the new church was then erected. It was the first Catholic church in Berdarski Gerani, solemnly consecrated on September 29, 1903. It was built with the help of local Catholics.

In 1930, a new Catholic church was built in the village. It is three-nave, with elements of Gothic style. The whole local population, with the help of the faithful from the nearby villages of Gostilya and Bregare, gets involved in the construction. It was solemnly consecrated on April 16, 1934 by Bishop Damian Teelen. In the period 1934 – 1946 the parishioner was the father of Dr. Evgeny Bosilkov – the present blessed patron of the Diocese. The interior of the church was completed in 1936. The temple feast is March 19.

An interesting fact is that the village of Berdarski Geran is called “the capital of Banat Bulgarians”. The local population is a worthy heir and representative of the lifestyle and culture of the Banat Bulgarians. In recent decades, the ethnic customs of their ethnic group have been restored and restored. One of them is Fershangi. In the Orthodox Church, this is the Covenant. It is celebrated for 3 days with songs, dances and carnival masks – women of men, men of women. In recent years, Banat Bulgarians from the Bulgarian villages of Asenovo, Gostilya, Tranchovitsa and from the village of Brescia (Romania) have taken part in the celebration.

Another custom is the Ball. During the custom, the participants defile with traditional Banat Bulgarian costumes.

Another interesting thing about this area is the kitchen. The people of the village of Berdarski Gerani have preserved their cuisine as they brought it upon their return to Bulgaria. The pig and the goose are honored. Banat Bulgarians are known for growing meat and fat geese. Goose down makes the quilts and pillows that are characteristic of them. They make sausages from the pig. Knee pig is a very special holiday. It’s called “killing” and is made before Christmas. Typical food for the people of the village is soup – leaves. It is made with thinly rolled pasta sheets, which are placed to give more density. There are many more curious and delicious secrets from the “cuisine” of this group that can only be felt in the village of Berdarski Gerani.