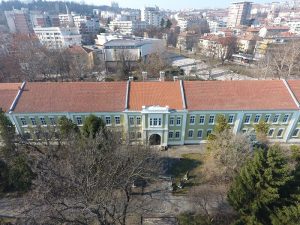 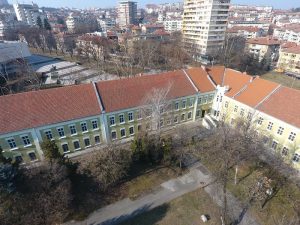 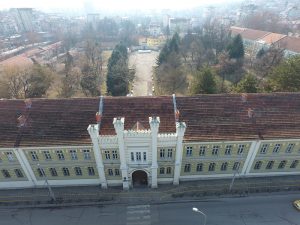 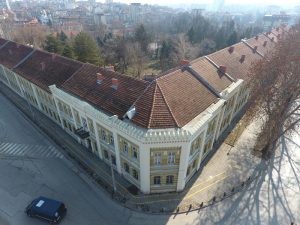 The barracks of the 4th infantry Pleven regiment

The building of the 4th infantry Pleven Regiment is a huge building (about 4000 m2), developed in the form of the letter “D”. Construction began in 1879 and continued until 1896, when the discovery took place. The barracks are intended for the needs of the young Bulgarian army that was created immediately after the Liberation. The designer of the building is unknown. The layout-spatial composition is one of the European type of barracks that was widespread in Central Europe and Russia in the late 19th century.

The two two-storeyed wings of the barracks are perpendicular. They are built in stages. Construction of the wing with a facade to the city garden began immediately after the Liberation, and the other wing – 3 years later. Both wings are designed along the corridor system. The rooms face the street, not the view. In contrast, the yard is protected from adverse winds and is open to the south. The corridors are wide and the number of office space has been negligible. The facade of the building is designed in the spirit of classicism, although its tooth-toothed finish is quite deliberate and eclectic.

The construction of the building was assigned to the firm of Konstantin Stoyanov – Konstantinov and CE.

In 1904, the 9th Pleven Infantry Division was formed in Pleven. Its composition includes – the 4th Pleven regiment of infantry was formed in 1884 by Vidin’s No.10, Lovchan’s No.13 and Sevlievo’s No.14 infantry, one of the first 8 regiments of the Bulgarian army and part of the 9th Pleven Infantry Division and The 17th Dorostol Regiment, which was then stationed on the Romanian border.

Today the ex-barracks house houses the expositions of the Regional History Museum – Pleven. It is one of the largest museums in Bulgaria by exhibit area. The building is a cultural monument of national importance.

ROME – Pleven traces and reflects the cultural, historical and natural heritage of the Pleven region. It distinguishes itself as an ethnically segregated community. Banat Bulgarians. In the museum complex can be seen the typical for the Banat Bulgarians costumes. Banat Bulgarians live in the villages of Asenovo, Gostilya, Bregare, Belene, Pleven and others. They moved to Banat (Romania) in the late 17th and early 18th centuries. At the end of the nineteenth century young families of Bessarabian Bulgarians returned to Free Bulgaria and settled in Vratsa, Pleven, Ruse, Svishtov and others. This population has a distinctive material and spiritual culture, with some Romanian influence. In the exposition “Traditional lifestyle and culture” of ROME – Pleven can be women’s, men’s, even children’s costume representing the folk clothing of the population of Belene, Gostilya, Asenovo. These are the settlements in the Pleven region, which preserve and present the traditions of Beshenov and Vinga (settlements in the Romanian Banat).

In another part of the museum’s exhibit, one can see original exhibits related to the Russo-Turkish War of Liberation (1878), which included Romanians. Most of them are donations from the Romanian and Russian Ministry of Defense in 1904, 1954 and 1967. Various types of Russian and Romanian uniforms, armaments of this period and documents are shown. Exposures of Romanians and Bulgarians, such as joint wedding customs, are also presented.

The Regional Museum of History was created to preserve and present the rich material and intangible culture and traditions of the local population from ancient times to the present, regardless of its ethnic composition. Due to the diversity of different ethnic groups, it is valuable for maintaining the self-awareness of the future generation. It is a building filled with the spirit of the history of the Bulgarians and their relations with other nations. The building is a cultural monument of national importance.