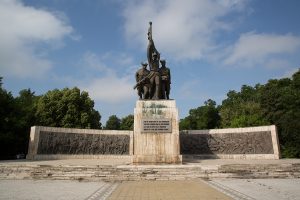 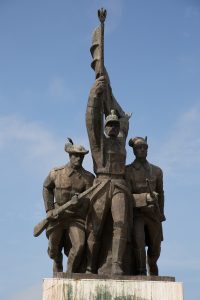 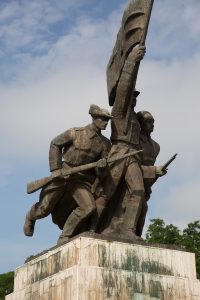 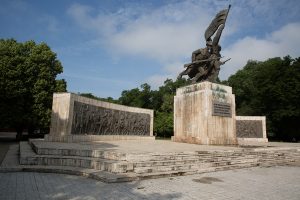 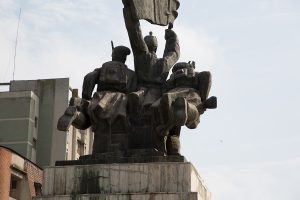 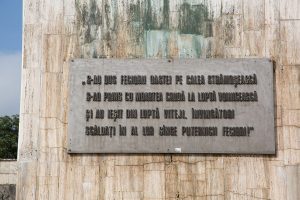 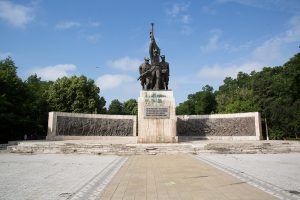 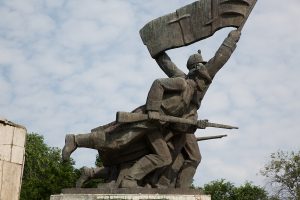 During the Independence War (1877-1878) the city of Turnu Măgurele acquired an important strategic role: on the bridge built on the Danube the Romanian army passed to Bulgaria and the Turkish prisoners of war were brought; here was the communications center with the front line, the supply point of the Romanian and Russian armies, the center of press correspondents and the area with the most campaign hospitals. The citizens have acquired this role and have kept it in the collective memory through many street names: Independenţei, Victoriei, Griviţa, Plevna, Smârdan, Cavaleriei, and Vânători. There was even a proposal for a new church to be built, named „Cathedral of Independence”.
To celebrate the memory of the war heroes, on the public garden, was erected by the sculptor Rafaello Romanelli, in 1907, the statue called „Dorobanţul”. The monument was moved in less significant position on 1985 and in its place was located the new „Monument of Independence”, the work of sculptor Constantin Schirliu, designed as a large work, with wide openness and special prestige.
On a central position, on a rectangular, massive and tall base, a statuesque group in ronde bosse technique represents three soldiers caught in an attack, moving upwards, under the folds of the tricolours flag. The symbolism of the group evokes the three weapons, „dorobanţi” (infantry corps), „călăraşi” (horseman corps) and „roşiori” (elite cavalry corps), as the military of Teleorman served in the no. 3 Calaraşi and no. 5 Dorobanţi Regiments.
Four bas-relief registers expressing the artist vision are located on the two side alveoli:
– A Romanian military artillery unit marching in front and giving honor to the commanders, showing in the foreground the general Alexandru Cernat, commander of the Operations Army and the king Carol I appearing only in the background;
– The battles at Plevna and Rahova, scene of the Romanian infantry fighting at one of the redoubts with the Ottoman army; the Teleorman soldiers fought for the conquest of the Turkish fortresses at Griviţa, Plevna, Opanez and Smârdan;
– Turnu Măgurele the main center of health care, during the war here operating 10 hospitals, supported by the Ministry of War, the Red Cross Society, and other charitable companies, the Independence Hospital etc., where the Romanian, Russian and Turkish wounded were treated;
– The contribution of Teleorman county population to the victory of the war by many offering for the front – the inhabitants of Teleorman county made the greatest sacrifice during the war: they were on the route of the Russian and Romanian armies heading for the Bulgarian front, they endured the heaviest demands, donated money, cereals, beans, traction animals and for food, hay etc.
The impressive Monument of Independence at Turnu Măgurele is made by valuable materials, the travertine for the base and the bronze for the sculpture. If the central statue is oversized, the personages on the bas-relief are in natural size, with natural gesture, individualized and expressive figures. The soldiers in specific uniforms are surprised in eloquent and highly suggestive scenes. The sculptor realised a true narrative of significant moments of the Independence War.