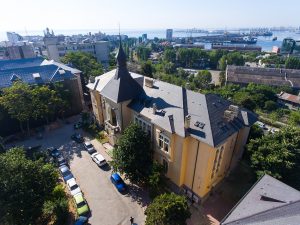 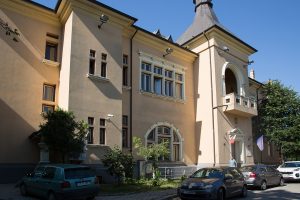 0001-67
After the Independence War and the regaining of Dobrogea region, the King Carol I understood the socio-economic significance of the new province and paid close attention to the main city, Constanța, whose position as a seaport provided a maximum opportunity for the Romanian state. The municipality responded with the same affection and appreciation and built, together with the Administrative Palace and the Court, on the former site of Belvedere garden, in front of the old railway station, a summer residence for the king and his family. Carol I rewarded the act by giving the status of royal residence to the city.
A royal residence was not provided on the initial plans of the Administrative Palace (Prefecture) of 1892, but it was added to the redrawn project in 1898. The projects of the public buildings, the Prefecture and the Court, were built later, since 1903, during the term of liberal prefect Scarlat Vârnav and of the mayor Christea Georgescu, a period of great urban effervescence in Constanța.
Placed between the two official buildings, the Court and the Administrative Palace, which formed two equal and symmetrical bodies, the Royal Palace, occupied the side from the port and had the most beautiful view to the sea. Elegant apartments of the king and queen, work and guest rooms, reception and banquet rooms and terraces with nice views were inside.
Since the beginning of the construction of the three buildings, the architect coordinator was Daniel Renard, a 32-year-old born in Romania, from a Swiss father and a Romanian mother. With architectural studies at the Fine Arts School in Paris, he will become the main promoter of the Art Nouveau current in Romania.
Stylistically, the royal palace is well connected with the other two buildings, the Administrative Palace and the Court, which represent entirely the eclectic style of the epoch. The Royal Palace is also decorated in an eclectic spirit, with some elements from the Neo-Romanian style repertoire. Additionally the building displays elements and details of the morphology of the new Art Nouveau style, which the architect Daniel Renard will virtuosity mastered at Constanța Casino building. The asymmetrical and undulating or geometric line, the ornamental feature of the style, imprints to the volumes a certain compositional vibration through successive withdrawals of the facade and the presence of the bay supported by angular consoles. More importantly, the aesthetics of Art 1900 is manifested by the presence of the central balcony arcade shaped, with a high and supple tower, which breaks the monotony of the ensemble and gives to the façade the unique note of verticality; through the long terrace, with high glazing and wrought iron metal carpentry from the sea front as well as the entrance on the east side, with its asymmetrical porch.
After the First World War, King Ferdinand and especially Queen Mary refused to return to this residence, which they given in 1923 to the Ministry of Justice.