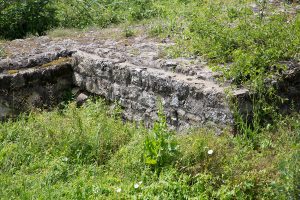 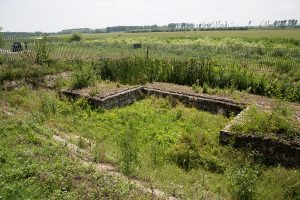 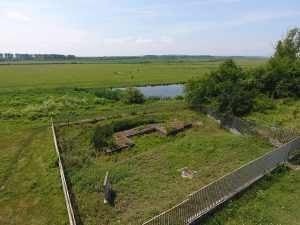 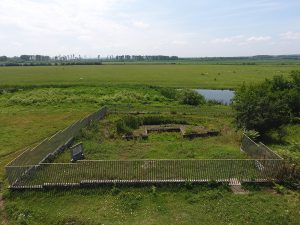 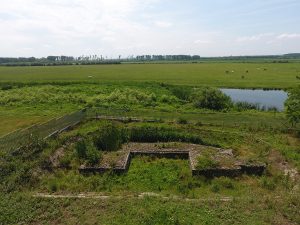 On the 4th century A.D., during the reign of Constantine the Great (306-337), when the center of gravity of the Roman Empire moved to Byzantium, the most suitable place to cross the Danube was near the fortresses of Oescus on the right bank and Sucidava on the left bank of the river. The Roman army way from Constantinople toward the north of the Danube, for military operations against the Scythians or in the attempts to recapture Trajan Dacia, passed through the steps of the Balkan Mountains, followed the Isker valley and over the Danube, followed the Olt valley, beyond the Carpathian Mountains. The ruins of the bridge built by Constantine until 328 are today between the localities of Ghighen, Bulgaria and Celei, Romania. After several decades of operation the bridge was destroyed, therefore it could no longer be used by the imperial expeditions of 367-369 against the Goths.
The main documentary sources are the works of late Roman authors and Byzantine chroniclers of the 7th and 11th-12th centuries, all concerned about the reign of Constantine, the first Christian emperor. Aurelius Victor, historian from the second half of the 4th century, notes that in the context of the military campaigns from the Lower Danube, the emperor „built a stone bridge over the Danube, built fortresses and castles in many suitable places”. This fact was reinforced by a chronograph from the same century, which also indicates a safe date of bridge inauguration, perhaps July, 328. Byzantine chroniclers, in their later compilations, take over the event, but say further that „in that year Constantine the Pious, crossing the Danube, built a stone bridge there and defeated the Scythians.” How looked like the imposing building? Because of the lack of any contemporary hints, the reconstruction of bridge architecture, from which until present days were preserved the ruins of the northern portal and submerged fragments of stone piles, is possible by combining the archaeological data obtained in over a century of field and underwater research and by analogy with Trajan bridge at Drobeta (Turnu Severin), built by Apollodorus of Damascus.
The portal, which also had the role of a pile, was equipped with crenels and rooms with observation openings and firing holes, and probably decorated with statues was located on a rectangular stone platform, flanked by the lateral sides of masonry legs supporting the vault. The masonry had an irregular stone filling inside and was covered with finished limestone blocks at outside. At this point the wooden deck was 10 m height, the exactly the difference from the Danube terrace. To the north, the bridge deck was resting on a masonry foot and on wooden pillars. To the south, three stone piles, moulded blocks dressed, were discovered by divers in the river waterway.
Between these strong piles the bridge legs were made of large wooden pillars. The railings and arches that joined the bridge legs were wood made as well. Regarding the building technique of the piles, the method used required the diverting of Danube waters. The building materials, stone and wood, were brought from the Bulgarian side, there numerous limestone quarries were operated and endless oak and coniferous forests were growing.
The remains of the Constantin the Great Bridge must be viewed in the inseparable relationship with the complex of Roman-Byzantine monuments: the civil settlement, the fortress with defence enclosure, the towers and curtain walls and the strategic road that linked Sucidava to the provincial capital, Romula-Malva.